2015 is a weird year.  It’s indeed a weird time when the Son of Goanna is getting thinner and Gina is getting large enough to claim a postcode.  A time when the runs scored by a befuddled test team approximates their collective IQ and our elected goat-herd let by the Bish golds in trough gouging.

I love contrasts and I do strangely admire excess.  The caveat being if I can admire from a distance suitably attired in wellies and a thick rubber apron. I also love a good catalogue.  And to this end I have to doff my lid to the recent Domayne Bathroom Design ‘log’ that was scattered in the driveway together with offers from tree cowboys and varnished estate agents.

The Domayne dog is sixteen pages of taps,baths, basins and dunnies.  I love dunnies – always have since Stringer Armstrong told us the story about the country throne that sent him to hospital. Stringer was a teacher at my school, Knocks (as in hard) who had lost a leg somewhere.  He had a bit of a Douggie Bader refit so whenever his leg came into contact with anything it rang like a cow bell.  He only wore one pad when he played cricket and didn’t need a bat to do a leg glance.  String told the story of himself as a young teacher going to his first one teacher school.  He was boarded by the community on a farm on the outskirts of the small country town.

The first night in the new accommodation after a large,hearty meal saw him in need of dropping a weight grade or two.  He was sent out the back to the dunny. His mother had warned him about spiders so before hopping down he lit a match and inspected the arrangements.  Satisfied he dropped the match into the pan unaware that country practice involved putting a bit of kero into the bottom of a ‘fresh’ pan. A burnt freckle meant that String was a few days late in taking up his first bush appointment.

String would have been amazed at what water closets were available to your modern day punter. Within the pages of the Domaine log your are spoiled for choice if you have plenty of Harry Nash. Despite the allure of alliteration the log’s writers resisted the urge of ‘Domayne Dunnies’ and elected for Designer Toilet Suites.  And what sweets hey are! From the moderately priced “Parisi Quasar” at $1495.  You could also bog-on with models called “Joyce” – possibly one for the Qantas Frequent Flyers or “Jazz” that was designed by the Italian pan princes Sandro Meneghello and Marco Paolelli.

But the one that caught my eye was the Tece ‘Tecelux’ Senso Touch Electronic Black Glass Panel with Cistern. Oh what a feeling! With 3.3L flush. The ‘log’ goes on to describe this wonder; 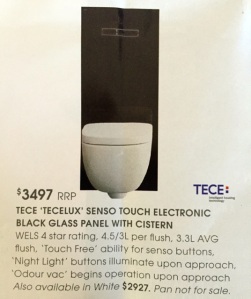 I don’t know why but when I saw this I immediately thought of Bronwyn Bishop.  Maybe it was the severity of the black glass panel against the white pan?  More likely it was the shit-awful excesses of the Bishop and the other horribly entitled clowns that reminded me.  However one thing is for certain it will require much more than the ‘odour vac’ to cover up the stench of their distasteful excesses.

An often intemperate spray about rugby league, horse racing, sport-in-general, media madness, politics and other things that happen to come out of the blue.

Always back the horse named self-interest, son. It'll be the only one trying

Portugal in a month